From the start, the Seattle Kraken and Climate Pledge Arena have partnered with local Indigenous artists to tell their stories through murals, carvings, and sculptures. The latest work is featured on the upcoming December 1 warmup jersey. — by Naomi Woolfenden & Bob Condor

Art has a way of connecting with all of us at the most basic and emotional level. Words can do it too, but art is unfailingly palpable.

As our community celebrates Indigenous People’s Month, Climate Pledge Arena and the Seattle Kraken are excited to highlight some of the talented local Indigenous artists whose works help shape the identity of both Climate Pledge Arena, the Kraken Community Iceplex, and the Kraken culture. Their installations inspire awe, expand minds, and build connections among sports fans, concertgoers, and passersby.

Outside the Southwest corner of Climate Pledge Arena, visitors are greeted by La Diab Pish created by Preston Singletary and collaborator David Franklin, a Kitsap-based sculptor. The 8′ tall steel and stained-glass-like sculpture is their interpretation of the GPO (Giant Pacific Octopus), which can only be found in Puget Sound. The sculpture’s red eyes light up at night. 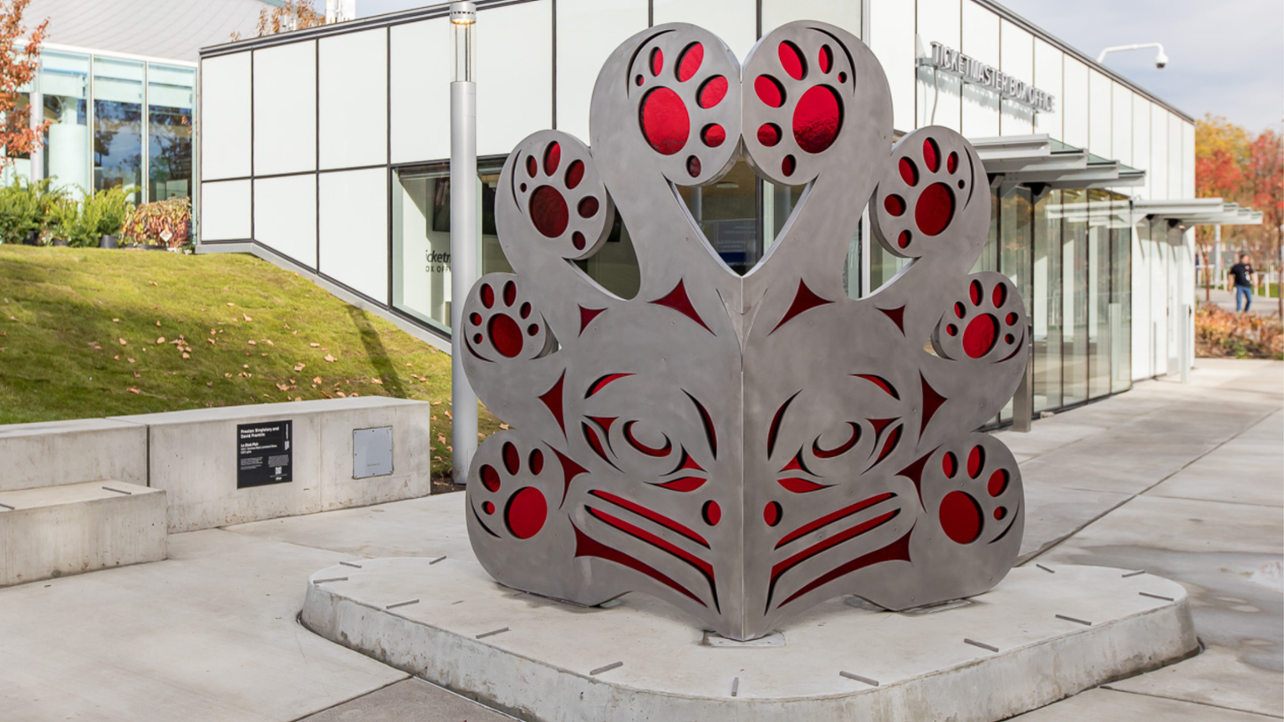 Singletary is a renowned glass artist who grew up in the Seattle area listening to stories told by his great-grandparents, who were both Tlingit Tribal members. He incorporates Tlingit themes and traditions into his works. This is true of La Diab Pish, which combines a Pan Coastal style with elements of his Tlingit heritage, Salish design, and echoes from around the ring of fire. The sculpture is visible from the street and serves as a gateway into both the Arena and Seattle Center.

Covering the southeast stairwell wall just off the Arena plaza is Jeffrey Veregge’s striking Legacy mural. In Veregge’s well-known Salish meets superhero style, he presents a vertical timeline of our region, beginning with the original Indigenous inhabitants, moving on to modern western life, and topping off with a futuristic cityscape. Trees bear witness throughout, reminding us of our continued responsibility to uplift local Native American communities past, present, and future. 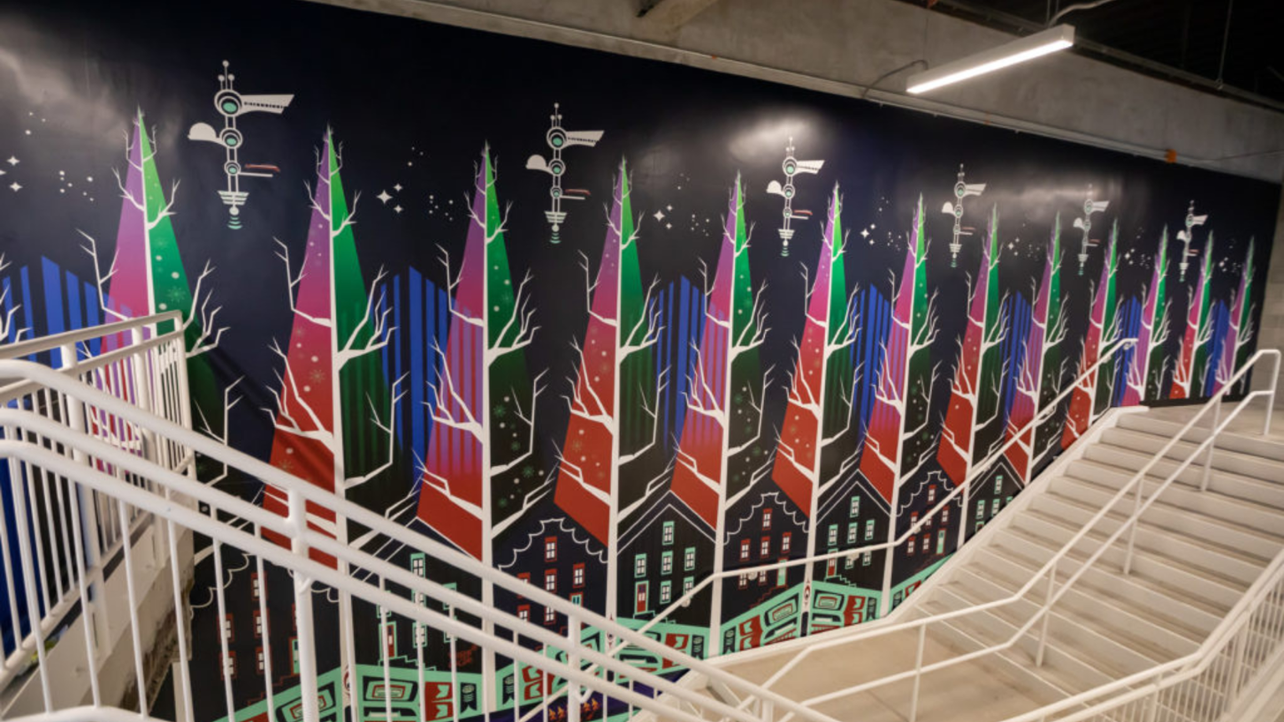 Just a few minutes’ drive north on I-5, hockey and ice sport enthusiasts are welcomed to the Kraken Community Iceplex by Andrea Wilbur-Sigo’s cedar and steel sculpture. Wilbur-Sigo is a Native American master carver and active member and educator of the Squaxin Island Tribe. She is the first female carver in many generations of carvers in her ancestry.

Her installation features seven large paddles (representative of seven generations of ancestors and the next seven future generations, plus the traditional canoe journey) and one hockey stick (“the eighth generation,” says the artist, and, yes, she intended a connection to tentacles). 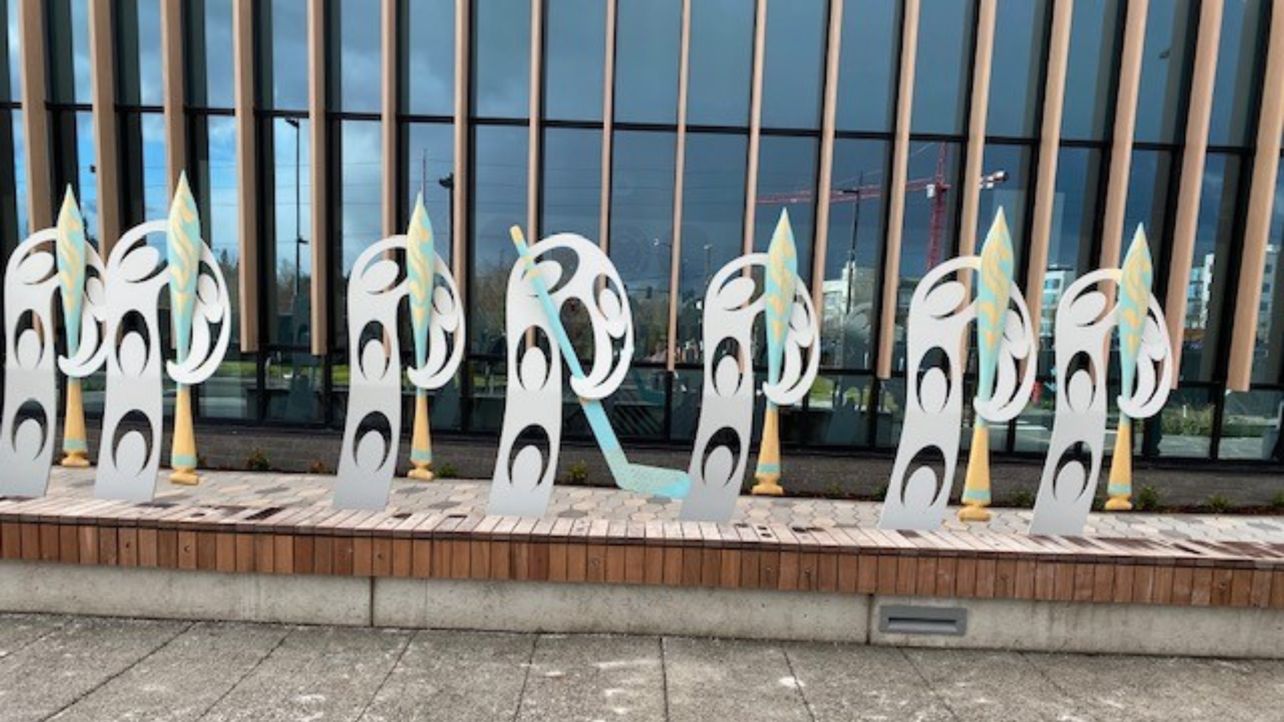 Twenty-five years ago, it was hard to get Salish work out there in public spaces, said Wilbur-Sigo, adding “15 years ago I am not sure our work was understood.” Fast forward to 2022: Wilbur-Sigo is one of seven Native artists commissioned by the Arena and the Kraken.

Last but not at all least are two murals located on the first and second floors of the Iceplex created by Paige Pettibon, a Tacoma artist who identifies as Black, white, and Salish (from the Confederated Salish and Kootenai Tribes) and a steward of the Lushootseed language. 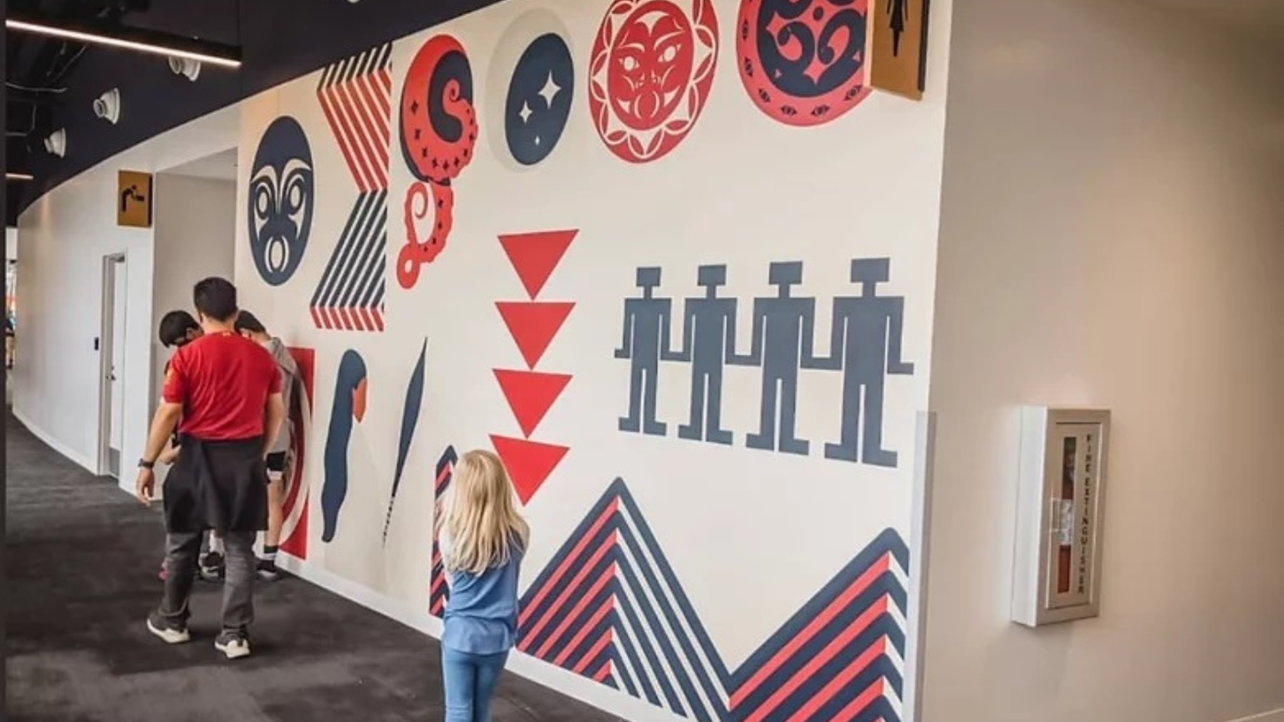 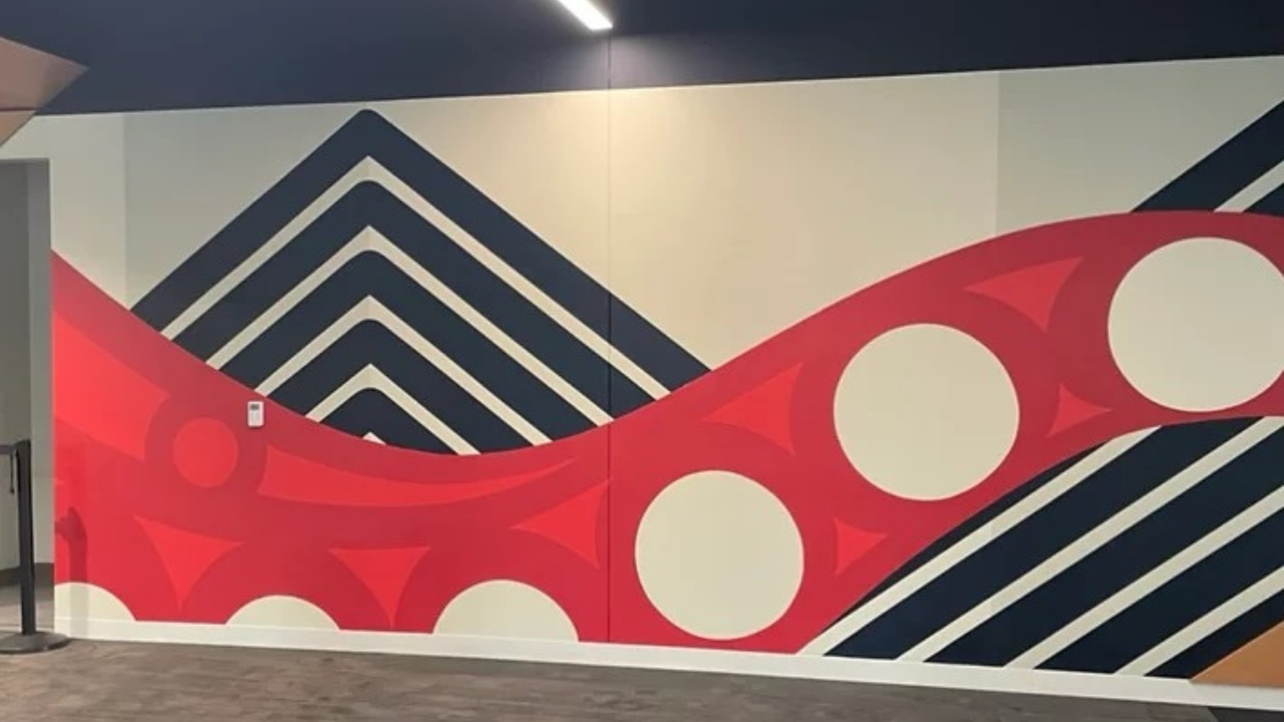 Pettibon joined the Kraken staff for lunch last week and noted, “The presence of Indigenous artwork at the Arena and Iceplex signal to our youth that this is a place for you. A place where you are welcome. A community and a sport where you belong.”

Pettibon also designed the Hockey Is For Everyone specialty warmup jerseys Kraken players will wear during pre-game warm-ups at this year’s Indigenous People’s Night Game on December 1st. The jerseys will be auctioned off during the game at One Roof Foundation’s Anchor Auction with a portion of proceeds benefitting United Indians of All Tribes. You can check out the full line of Indigenous Peoples Night merchandise for purchase here.

The jersey’s base is a vivid, intense orange in a purposeful nod to Canada’s Orange Shirt Day, designating September 30th as “a day to honor and uphold Survivors and intergenerational Survivors of the Indian residential school system, and to commemorate those who didn’t return home.”

With the orange base “evoking emotion and impact,” Pettibon integrates letters and numbers influenced by the traditional four-direction medicine wheel design. The medicine wheel represents the power of holistic medicine coming from each direction in Indigenous culture and four as a sacred number.

Pettibon says all of her paintings, fiber art, jewelry, digital designs, and more are inspired by “the beauty of the Pacific Northwest as a constant reminder to not take our environment for granted.” Her work has been exhibited at the Tacoma Art Museum and Smithsonian among others. She is also part of the yəhaw̓ Indigenous Creative Collective.

The Kraken and Climate Pledge Arena are grateful for the contributions of these talented artists. Our partnerships are one small example of our ongoing commitment to learn from and support local Native people, Tribes, and communities.

To learn more or to purchase works from some of the artists featured in this article, please see: Stonington Gallery, Preston Singletary’s website, Jeffrey Veregge’s website, and Paige Pettibon’s jewelry shop Plain to Sea. To purchase Native-created goods and artwork, explore Eighth Generation online or visit their store in Pike Place Market.

You can see the Kraken and Climate Pledge Arena’s Land and Peoples Acknowledgement below.

Climate Pledge Arena acknowledges that we are on the homelands of the Coast Salish peoples, who continue to steward these lands and waters as they have since time immemorial. We recognize Washington’s tribal nations and Native organizations, who actively create, shape and contribute to our thriving communities.

Climate Pledge Arena is committed to doing our part to engage with, and amplify the voices of, Native peoples and tribes.

[KIRO 7 News] Seattle kraken Give Back this Holiday Season December 16, 2022

[People] The Seattle Kraken Creates Charity Calendar Packed with Photos of the Players and Their Pups December 9, 2022